The most types of Karate was originated from Okinawa Island in Japan and has spread to many parts of the world. For many years, this art has been used as a means of self defense and is characterized by the use of stances and hips to generate strikes which are delivered with special shouts. It is primarily a striking art where kicking, punching and the limbs are used to strike the opponent. With years, the art has grown many variations and techniques, each with its own unique styles. Here are some types of karate that have developed.

Most Popular Types of Karate 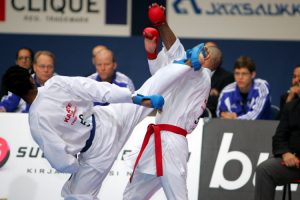 Shotokan is among the four main types of Karate in Japan. It was developed by a school teacher called Funakoshi Gichin from Okinawa, who introduced it into Japanese mainland in 1921. Shotokan karate is characterized by use of linear movements and deep long stances which were named after his nick name “Shoto.”

Goju-ryu, also known as the soft/hard school of karate, is one of the four original types of karate from Okinawa. The “go” in its name means hard or tough in Japanese while”ju” means soft, relating to its circular joint locks and strong punches. This type of karate was founded by Miyagi Chojun Miyagi and was later developed by Kanryo Higashionna. Goju players usually use this style to meditate and to perform body conditioning exercises. Here you can read more about Goju-ryu karate

The karate master named Kenwa Mabuni developed this type of karate in the early twentieth century. He was born in a samurai family where he did different types of martial arts in his teens and developed Shito-Ryu. This style is a combination of the techniques used in Shuri-Te and Goju karate and is characterized by linear strikes, square-on stances and a large number of stylistic elements. Here you can read more about Shito-ruy karate.

This type of karate is among the four original types from Okinawa. Wado-Ryu Karate was developed by Otsuka Hironori, who was among the students of Gichin Funakoshi before World War 2. It mixes the styles of Tai Sabaki, Jujutsu and Shotokan karate. Here you can read more about Wado-ryu karate.

This style was founded by Masutatsu Oyama in the 1920s. It is usually referred to as one of the hardest styles of karate since the fighters practise how to deliver and take hard blows and the matches are only won by knock out or knock down. Here you can read more about Kyokushinkai karate.

Budokan was not developed in China or Japan. Instead, it was developed in Malaysia by Chew Choo Soot and has spread all over Asia and throughout the world. Its founder studied jujitsu, judo, jujitsu, shotokan and wrestling and incorporated the techniques into the style.

Kenpo is one of the most popular fighting types of Karate in America. It emphasizes on the use of feet and hands for striking and also uses fighting techniques of other Okinan styles. Unlike most karate styles which use white uniforms, Kenpo uses black uniforms for higher levels and sometimes mixes both colors interchangeably for the pants and tops. Here you can read more about Kenpo karate.

Other Types of Karate

Besides theses types of karate, there are many other styles, family forms and systems of karate such as Uechi-ryu Chito-ryu and Shuri-ryu. Some of them use special equipment or traditional Okinawan weapons. All in all, karate is a good dynamic physical art since it uses all body muscles, provides exercises and develops agility and coordination.