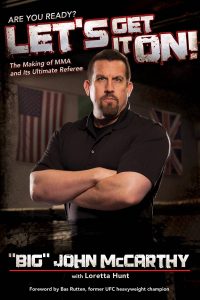 When I first walked in to Big John McCarthy’s Ultimate Training Academy (BJMUTA), it felt like I had just stepped onto a movie set.

It was 2006. Mixed Martial Arts (MMA) was just on the cusp of becoming one of the fastest growing sports in the world. The Ultimate Fighter was already a popular television show, attracting millions of viewers each week. The UFC was asserting its dominance as the premiere contact sport promotion. And referee Big John McCarthy was (in many ways) one of the key faces of MMA and the UFC.

“Let’s get it on!” McCarthy’s trademark call for the battle inside the cage to begin was proudly posted everywhere in the gym. The full-sized boxing ring, the regulation-sized Octagon cage, the sprawling BJJ floor mat, the field of hanging heavy-bags, and the extensive workout equipment signaled to me that this place was as much spectacle as training facility. Not pageantry. Spectacle. There was no fluff. There were no cameras. But everything was so exquisite. It was all so available.

“You can use all of the facilities: the ring, the cage, the equipment, the dressing rooms,” said our tour guide.

“Wait, we can use the cage whenever we want?” I replied.

Suddenly it hit me. This was more than a martial arts studio. This was a camp. Big John McCarthy opened this training facility to create an army of mixed martial artists. He spared no expense to bring in the finest equipment; he ensured that each person entering his doors, regardless of their level of martial arts experience, would find whatever they needed to succeed in their goals; and he guaranteed that this camp would produce top-level martial artists who were prepared for competition. There would be no excuses for failure here. As is fitting in the middle-class neighborhood where the gym was established, there would be no shortage of opportunities to excel.

Having trained in MMA off-and-on for the previous 5 years, I was pretty confident walking into the gym that I’d be capable of competing with whomever I was placed. I learned to be humble rather quickly. My first class was an intermediate jiu-jitsu class in the gi. The instructors were Lou Salseda and Big John McCarthy himself (a BJJ black belt in his own right). The lesson today covered a variety of collar chokes from the mount position. My partner was a recently promoted purple belt who weighed 50lbs more than me and was 6 inches taller (which is saying quite a bit since I’m 6′ tall and in good athletic shape!). He was agile, aggressive, strong and quick to adapt. He never forced anything by sheer strength. He relied on technique and swift hip movement. He was simply a very good practitioner of the sport.

During our time of implementing the techniques, Lou Salseda and Big John McCarthy paced around, overseeing their students’ progress. Out of the corner of my eye, I could see Lou standing over a pair of students. I wondered what he was teaching them; wondered if I might get noticed. As the new guy, I wanted to make a quick impression; to show them that I was no slouch; that I was ready to be included in the camp. And right on cue, from my blindside, was Big John McCarthy.

“Show me what you got,” he bellowed.

Momentarily I froze. With his 6’4″ 270lb frame towering over my partner and me, I realized for the first time the legitimacy of his moniker.

“Come on. Make something happen.”

Without a word, I proceeded to demonstrate a methodical cross collar choke. My partner tapped. I looked up accomplished.

He motioned my partner up and took his place.

“Let’s go,” he called with an accompanying wave of his hands.

When the boss calls, you listen, right? Right. So I proceeded to the mount position… sort of. My shins could barely rest on the ground. This man’s torso was enormous! But I eventually settled in, got into position, and locked in the choke… he didn’t tap. I applied more pressure. Nothing. One final burst of pressure and torque. Nope.

“Your right hand position is off. There’s not enough pressure because it’s facing the wrong way. Turn your wrist away from you. It’ll place the bone of your wrist right into the side of my neck and cut off the blood flow when you sink the choke in. And don’t back off. You won’t hurt me.”

So I started again. I slid my right wrist down his right collar, under his protecting hands, and forced my knuckles into the mat, wrist facing away from me; I based my head to the right of his head, with my left hand based on the side of my right hand; then I brought my left thumb and hand into position, with a tight grip on his left collar; and finally I leaned forward and placed my head onto the mat above his. Tap, Tap!

And with that, he got up and moved on to the next pair of students. After he left, my partner and I exchanged turns implementing what we had just been shown so that it was ingrained. It was only a minor adjustment; one that we had already ‘known’ prior to being corrected. But sometimes it’s easy to succumb to lazy habits in the application of martial arts. Sure, the technique was effective prior to the adjustment. Most would have tapped under such pressure. But it wasn’t technically sound. As such, it was flawed. Flawed not only in its efficacy, but also flawed in it’s spirit.

The martial arts are a series of disciplines that teach one combat maneuvers, yes. But more than that, the martial arts teach discipline and awareness. After my first class at BJMUTA, I knew that I would not be allowed to cut any corners. The instructors and coaches on board would ensure that if I were to progress at all, it would be at the highest level of discipline and awareness. For although Big John McCarthy’s Ultimate Training Academy was a spectacle to behold, there was a responsibility that came with all the provisions: an unwavering commitment to the mission set forth for this camp.