The Deadly Martial Art of the Machete

As a farming and field tool, the machete is respected and revered across the world.  As a weapon, it’s power is enough to make well-trained soldiers run and hide.

We’ll also see how the machete has come to symbolize honor and freedom for three distinct nations with a shared heritage. But first, we need to go back to Africa.

As to be expected from the cradle of civilization, Africa has a rich tapestry of indigenous Martial Arts. Included in these are many forms of stick fighting such as “Tahtib” and “Xhosa”.

Learning these arts are rites of passage for young, rural boys. Tribal elders are said to beat boys who don’t carry a stick to remind them of their stupidity. Stick fighting is also learned for self-defence and warfare. A prime example of this is Nguni stick fighting, practised by the infamous Zulu warriors.

Stick fighting is also a safer, cheaper and less conspicuous way of practising bladed techniques. It forms the foundation of machete fighting, as it does in Filipino Kali.

Into the New World

From the 16th Century onwards, the colonial superpower such as Spain, Portugal and France plundered Africa for slaves for their colonies across the “New World”. They used them mainly to work in the unforgiving heat of sugar and cotton plantations.

The slaves continued practising their cultural arts in secret and fused them into their new societies. Brazilian Capoeira is a great example of this.

Machete fighting followed a similar development in three other colonies – Haiti, Cuba and Colombia. Armed with their trusty machetes and their ancestral fighting arts, the slaves would change the course of history.

Haiti – The Origins of Tire Machét

Fighting stick were used by African slaves to defend their honor in duels and in ceremonial dances. Sometimes, the sticks called “Banglas” had small nails in the end. Ostensibly, they danced to honor the saints, but the dances disguised the practice and movements of Tire Machét (translation: “To pull blades”).

By 1677, laws were passed to outlaw stick fighting on all French-Caribbean islands. However, as fast as the police confiscated the bloodied sticks, they were quickly and easily replaced. The slaves continued to meet in secret and held “Kalenda” – Stick combat and competitions.

The Greatest Slave Uprising Since Spartacus! 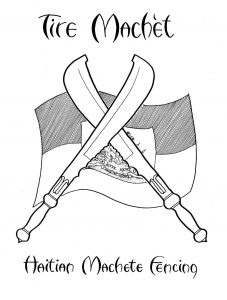 In 1791, just two years after the French Revolution, the slaves of Haiti revolted against their French Colonial overlords. It has been dubbed “The Greatest Slave Uprising Since Spartacus”

The uprising lasted until the slaves  (unlike in Spartacus’ time) were successful against Napoleon’s mighty French army. The machete was pivotal to their success.

At the beginning of the uprising, it was the only weapon that the slaves had access to. As sugar cane farmers, they were already experts in wielding the tool.

After the revolution, Haiti became isolated from colonial powers. They set to preserving cultural traditions such as music, dance and martial arts. And so “Juego de Machete” became more systemized.

An Established System for Tire Machet

After the end of slavery, fighting with sticks (Tire Bwa) was still the foundation  for machete fighting.  Once the student became skilled with sticks, they would move on to knives (tire coutou) or one of the many different styles of machete fighting.

To get a acquire a basic skill  in the art took less than 6 months. Mastery took far longer and involved the student passing “The secret of Dessaline”. A test which called for fighting blindfold or in the dark. With blades!

In Cuba, machetes were also used by enslaved Africans to settle duels and prove manliness. As part of an initiation into “Abakua” groups (a secret society for Africans slaves) they had to “Test Iron”. This means to kill a white person with either a machete or a large knife.

At the end of the 19th century, machetes saw a lot of action in the wars of  independence with Spain. The Spanish soldiers carried Mausers, a repeating rifle that was the best of its age. At the battle of Maltiempo in 1895, once the Cubans ran out of ammunition the Cubans charged the Spanish with  their machetes.

The Spanish, side-armed with Sabers, were no match for the Cubans trained in “Arma Blanca” (meaning bladed arts). Imagine a well-trained horde of machete wielding guerilla fighters chopping heads as they ran.

The Spanish that survived were completely and utterly demoralized. They became more afraid of machetes than rifles. And so, the battle of Maltiempo (1895) became a famous victory for Cubans and Cuba.

In Colombia, Machete fighting in commonly referred to as “Grima”.

Grima shares the same fundamentals as Machét, and is also closely related to the Cuban style. A Cuban, Abelino Rosas, nicknamed “The Lion of the Cauca”, taught his style in Colombia. This style became widespread and is known as “Cubano”.

However, the exact origins of the art in Colombia are debated. Some believe the art originated from African slaves who were brought to work the mines. Others believe that European soldiers and their fencing styles influenced Grima.

After becoming established, many sub-styles sprang up such as Cubano Moderno, Venezolano Mederno and Espanol Ralancino.

For a weapon famed for its brutal savagery, there really is a subtle and graceful art to Machete Fighting.

As with many martial arts, it has developed into various subsets due to the experience of its practitioners. There is no doubt it was influenced by European fencing, in much the same way as Filipino Kali incorporated Spanish fencing.

However, common principles exist across the epicenters under discussion. The different styles share a pattern of  8 basic attacks and fundamental defences.

The “en guard” position is the same across all the styles. Practitioners will have one hand behind their back to keep it safe, but they will employ it at close-range where possible.

The blade is kept in an upright vertical position and the practitioners move around it (as opposed to swinging it around wildly) to try and “fence” their opponent in.

Defence is vital to the art and attacking strikes are added with crouches, pivots and advances. This makes a lot of sense as one received strike from a machete could very well end the contest. And perhaps your life…

There is defensive footwork, named “falsos” and low ducking movements called “desgonses”. Often, the practitioner will try to find the inside line where it is possible to strike with safety.

Often, the middle of the blade is used to block and parry. As this is the strongest part you can understand why.

The blocks and deflections are a sight to behold. They make use of the flat and spine of the blade to flow seamlessly into attacks. In this manner, it reminds me of some of the sword work from Tai Chi.

As you’d expect, students of  machete fighting don’t start off swinging sharp blades around. Similar to other bladed arts, they begin with wooded sticks and also wooden swords. They also train and fight wielding a stick and a machete simultaneously.

The type used by sugar-cane harvesters in Africa and the Caribbean is a called a “Panga Machete”. It is typically around 21 – 24” in length which curves slightly upward. It has a deep belly for chopping and slicing. The reverse tip can also be used for piercing and stabbing.

At around 2.5mm thick, it is a capable and extremely durable tool – or weapon!

The Re-emergence of Machete Martial Arts

“Professor “Alfred Avril, a Tire Machete master “ invited foreigners to travel to Haiti to lean Tire Machét. This led to one of his foreign students, Jason Jeffers crowdfunding a short movie, titled
“Papa Machete”, about Prof. Avril and the art.

The movie has been shared on Reddit and social media, igniting a lot of curiosity into machete martial arts.

Sadly, Professor Avril passed in 2014, though the art lives on through his sons Roland and Jean-Paul. Meanwhile, Mr. Jeffers also help establish “The Haitian Fencing Project” and they organize regular training camps on Haiti.

Not for the faint hearted!

Anthony Tucker is a life-long Martial Artist and an instructor in Filipino Kali. He has also studied Karate, Wing Chun, and JKD on three different continents.