The glorious brutality of MMA makes for good TV. Here is a sport wherein fighters are expected to dish out as much damage as they can to their opponents, and where knockouts are always the highest order of the day. Bloody cuts and banged up noses are common; fighters can even leave the ring with broken bones if they’re not too careful. A prominent MMA fighter just recently broke his shin due to a kick check gone terribly wrong.

The aforementioned examples just illustrates how tremendously powerful MMA is. Should you take it up as a viable personal defense option over a more “street-oriented” system such as Krav Maga? Read on to find out. 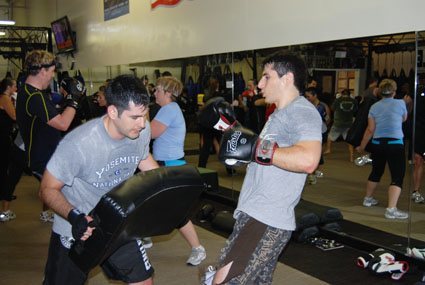 Mixed martial arts, loosely defined, is a full-contact sport that incorporates the use of both striking (i.e. punching, kicking, elbow and knee strikes) and grappling techniques (i.e. pins, sweeps, takedowns, chokes, and submission holds). An MMA fighter is usually trained in several disciplines of his choosing; usually Muay Thai, boxing, and several variants of full contact karate (like Kyokushin) for stand up, and any of the grappling arts like Judo, Sambo, and Brazilian Jiu Jitsu for groundwork. He can also attend a generalist MMA class wherein techniques from multiple arts are already incorporated into one class.

Krav Maga, on the other hand, is a martial art from Israel that was initially developed for the country’s military. It also uses techniques from other disciplines like Muay Thai, wrestling, jiu jitsu, and Wing Chun, yet the focus is on real-world situations. No fancy katas and flying kicks here- you’ll be trained how to react when an aggressor comes at you with a gun or a knife, or when you have multiple attackers coming at you with murderous intent. Krav Maga is not merely about defense, it’s about survival.

MMA is wicked cool and all, but its main disadvantage is that its fighters are trained to fight inside the ring or cage only, where there are rules and dirty tricks are absolutely not allowed. Krav Maga does away with all the preliminaries; if you have a chance to kick at an attacker’s groin, you do it. The same goes for techniques such as eye gouges and “fish hooking” (a move wherein fingers are inserted into the mouth or nostrils), all of which are dangerous techniques that are banned and illegal in MMA.

Krav Maga is all about efficiency and practicality. Given enough practice and drills, anyone can incapacitate an attacker with Krav Maga techniques. You can either learn Krav Maga online or from a competent instructor. And there’s no need to spend years in training in just one martial art- Krav Maga gives you the essential and proven street-ready techniques that you need to learn from multiple arts from the get go.

Top class MMA fighter Bas Rutten once stated that he does not want to face his friend Amir Peretz, a Krav Maga fighter, in a real-life match. And you can see where he’s coming from. Krav Maga is a deadly self-defense system. If you want to train in something different, then hop on over to the Martial Arts Lab to learn more about other Martial Arts tenets and techniques.

Featured image by Academy of Self Defense