Softness in the Martial Arts

The principle of softness in the martial arts, also known as gentleness or suppleness is often talked about and practiced. However the idea of violent action being countered with softness seems counter intuitive to the purpose of the martial arts.

Within the Japanese martial arts “Ju” or gentleness is a large factor and lies at the heart of its unarmed styles like aikido, judo, jujitsu and even karate. But what is this principle of softness? 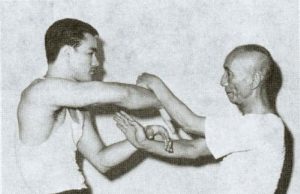 The act of yielding though seemingly counter intuitive does in fact hide a subtle power that isn’t immediately obvious. The assumption when defending oneself from attack is to meet it with force that destroys the opponent. Though this is an effective method, yielding relies on movement that seeks to go with the lines of attack, rather than attempt to resist it.

In doing this you are able to multiply your own force with the force of the attack. In other words you can defeat a person by relying mainly on their own force. How various styles interpret this is different for each school. Some seek to translate this principle in a very literal way, using throws and projections. Others interpret softness as moving the body out of the line of attack in order to follow with an appropriate counter.

As seen in Judo, the act of yielding can be interpreted in effectively taking the balance of the opponent, thus robbing them of good structure from which to attack. We can even see this within striking arts that rely on body movement, attacking the opponents balance from the right angle will destroy their structure.

In fact many in-fighting styles such as Wing Chun deal in the same distances as grappling arts. As a result using soft principles of cutting the line of attack and intercepting with an off angle strike can be very effective.

The act of blending can be seen most prominently within Aikido. Many of the projections in Aikido rely on blending with the force of an attack through proper use of timing, distance and cutting of angles. However blending is a part of many systems including styles like Baguazhang and Silat. These arts all deal with the principle of going with the attack rather than pushing through it. This is emphasised in much of the philosophy of these arts like Toaism and Zen.

There is a question often asked about when best to yield and when not to. Sometimes you will find yourself in situations where it is best to yield and others when you should be aggressive and hard. To me yielding often comes in with situations where you feel that you cannot affect your opponent with your own strength. Maybe it’s a punch, an insult, a gun? Either way it is a moment where instant aggression may make the situation worse or have no effect.

To me this is where the softness of the martial arts comes in. It is unexpected. You are expected in a violent or stressful event to react with anger or fear. Yielding and blending is counter to both these expectations. You remain assertive and active in dealing with the threat but at the same time you are not giving your opponent anything to use. It is this surprise that I think gives softness its effectiveness.

When not to yield

At the same time if I yield to every situation, I may in fact insight further aggression. If I am dealing with an opponent who lacks conviction, isn’t hitting with a lot of force (maybe) or, is made more aggressive by my submissive behaviour then assertive use of force is called for. Often this means I make the first move or escalate the situation. On a technical level, I am not giving my opponent a chance to attack. I have decided to act and now I am going to neutralise the threat, however that may be.

Softness in the martial arts is a phenomenon that can be extremely powerful but can be easily misunderstood. Often people interpret it as merely being weak or compliant. To me it is about going with the force of an attack or a situation and moving around it. Multiplying my own force and potential can make the effects of an attack even more devastating.

But most of all it is the unexpected response to violence that gives softness its esoteric reputation. Yielding is in itself counter to the goal of destroying the threat and, yet it is even more powerful than attempting to resist it.