Muay Thai Effectiveness in MMA? Here’s What You Should Know

MMA and Muay Thai: A Look Back

When competition mixed martial arts (in particular, the Ultimate Fighting Championship) was still in its infancy, rules and regulations were unheard of. Matches were no-holds-barred, players were allowed to strike at the groin, or headbutt and fish-hook if they can. The aim was to recreate the feel of a real-world fight scenario, and see which martial arts are well-suited for bashing it out on the streets.

This did not sit well with the general public, of course. Rules were introduced, the sport became much safer and therefore, more “acceptable” in the public eye. But the first few UFCs did manage to demonstrate to the public what kind of martial arts were effective both in the ring and in the streets. For grappling, it was Brazilian Jiu Jitsu. In fact, the first UFC Champion was BJJ master Royce Gracie from the prominent Gracie family in Brazil. For striking, it was kickboxing and Muay Thai. From thereon, the art of Muay Thai managed to rise from obscurity into one of the world’s foremost martial arts. It became the “base” striking style of choice for many MMA fighters. 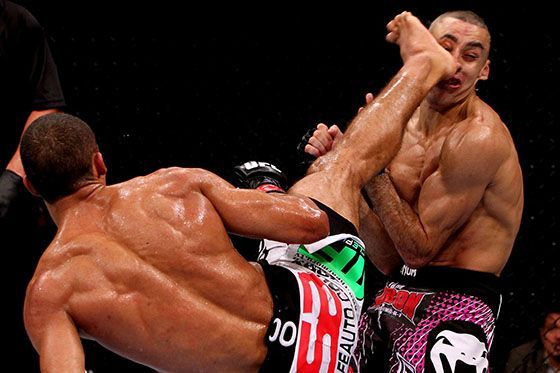 The Effectiveness of Muay Thai in MMA

1. Unlike boxing, that solely focuses on punches, or Taekwondo, for kicks, Muay Thai is an all-around system. It’s not called the “Art of Eight Limbs” for nothing. You have kicks, punches, elbows, and knees. You also get a repertoire of clinching techniques that can prove deadly to in-fighters who don’t know how to defend against them.

2. Muay Thai is relatively straightforward and very easy-to-learn (yet hard to master). Kicks that are commonly used by Muay Thai fighters include basic low and middle roundhouses, as well as teeps (punch kicks thrown either from the front or back leg). Punches are adapted from Western boxing, with jabs, hooks, straights, and uppercuts. No fancy acrobatics. It’s all about efficiency and devastating power.

3. Muay Thai does away with the unessentials. A single technique, like the roundhouse, is practiced endlessly. Muay Thai fighters are also expected to absorb much of the punches and kicks that are thrown at them in the ring, so their cardio and general physical toughness are top notch.

But like all other martial arts, pure Muay Thai alone wouldn’t cut it in most MMA matches. Muay Thai effectiveness in MMA is dependent upon the fighter’s ability to adapt some of its most essential techniques to the situation inside the Octagon. For example, here are the usual differences between pure Muay Thai and the Muay Thai that is usally practiced in MMA.

1. Muay Thai puts an emphasis on hip rotation. This makes for strongers kicks, at the expense of speed and the ability to rebound back to initial stance. This can be dangerous in MMA when you can easily be countered with a punch or a takedown. Most Muay Thai MMA fighters don’t put as much hip rotation into their kicks to avoid these kinds of risks.

2. Another problem would be the Muay Thai stance. Muay Thai fighters fight in an almost upright position with much of their weight on their back leg, so that kicks can be easily thrown and checked. This leaves them high at risk for takedowns. To counter this, the stance should be widened a bit, with the weight more evenly distributed on each leg (kind of similar to a Karate stance).

3. Footwork and head weaving are almost non-existent in Muay Thai. Muay Thai fighters are trained to absorb much damage and to trade kicks and punches with their opponents. This kind of mindset wouldn’t do well in MMA. One could cross-train in boxing to learn how to apply these techniques in MMA matches.