So, I’m like most people, I went along to a martial arts class as a kid, I get blown away and quickly become obsessed. This obsession as you probably know involves watching tons and tons of martial arts movies, I was a particular fan of Chinese martial arts movies. Kung Fu, especially Wushu, just seemed to have that edge of showy, spectacluarness that I was desperate to achieve in my fighting. If you’re not sure what I mean by Wushu have a look at this link, Wushu.

Unfortunately, unless you live in a big city, in the UK it’s pretty hard to find a decent club teaching Wushu or any traditional Chinese martial arts about. But I scanned the web and eventually I found something that seemed ideal, Rising Dragon Martial Arts School.

This is a school based in South-East China, aimed at westerners to come and train in traditional Chinese martial arts, you sleep there, eat there and by hell do you train there. So when I left school I saved up some money and set off.

The school offers students the chance to train in one of three types of Chinese martial arts,  Tai Chi, White Crane Kung Fu, or Shaolin Kung Fu. My boyhood fantasies were in reach, I picked the Shaolin path which incorporated training in traditional Shaolin Kung Fu such as forms, i.e. what the Jaden Smith does along the Great wall of China in the new karate kid, Sanda which is basically kickboxing but with take downs, though no ground and pound follow ups, and Wushu, the acrobatic heaven I’d so long ago fallen in love with.

The training was incredible, as I did the Shaolin kung fu path I can’t tell you about how the students of other Chinese martial arts train but I’ll tell you all the gritty details of what we did. We started circuit training at 5:30 AM, did a half hour there and then progressed on to general fitness training, e.g. running, weights or form practice. We’d get breakfast about 7-7:30 AM.

We’d then go for another run at 9:00 AM, either 3km, 5km or 10km on the tougher days. We’d then always have a big stretching session,I’m not the most flexible of guys but I got far closer than I’d every achieved in the splits over the two months! Then depending on the day we’d then do more forms, practicing the sequences, attempting to perfect the stances and the individual techniques. Or we’d do pad work, combo after combo, all in the outdoor heat, it was intense but it was brilliant, I couldn’t not love it.

Some days we’d do acrobatics in this gap before lunch too. It wasn’t quite as spectacular as the movies made it out to be, but we had to start somewhere, attempting, butterfly kicks, front flips, lay outs and back flips. It was hard, but I improved and by the end of my two months there I’d progressed from nothing, to standing still back flips on flat so I was pleased. Then we’d have lunch about 12-12:30 PM, and have a couple hours break.

Training would commence again at 2:30 PM with another run, again, 3km, 5km, or 10km. We’d normally spar in the afternoon or do general fitness circuits. By general fitness circuits I mean press ups down stairs like you see the Shaolin monks do on youtube, and all sorts of animal walks. In addition we did a lot of conditioning training, strengthening our bones and our muscles. When it came to 5:00 PM we were all more than ready for showers, some dinner and a break. 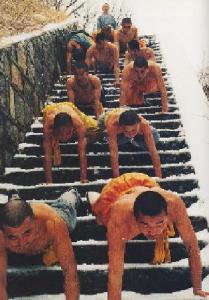 That was my routine for 2 months in China, 7 odd hours Chinese martial arts training a day all in rural China. It was a brilliant experience and one I’d love to repeat for a longer period some time because the skills I developed there barely scratched the surface of what there is to learn from Chinese martial arts. I could give you so many more details about exercises, the training regime, the surroundings, the food, the teachers, anything you want so if you’re interested either checkout Rising Dragon Martial Arts School or leave me a comment.

A Philosophy graduate with a passion for martial arts, travel and technology. Having done martial arts for over a decade ago I’m still just as obsessed as I was years ago. On Twitter @Colin1224