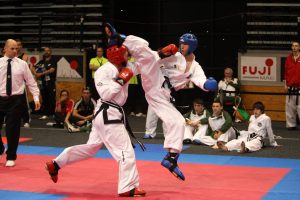 The origins of this style are disputed but it is commonly believed that Choi Yong-Sool started teaching a style that later evolved into Hapkido. This style incorporates elements from Judo, Taekwondo, Tang Soo Do, and Aikido. The main purpose of this style is to disable the enemy through quick striking followed by a throw or a lock.

Hwa Rang Do can be translated as “way of the flowering manhood”. This art was taught to young men of aristocratic families in medieval times, and it is still a popular Korean martial art. This style incorporates armed and unarmed fighting techniques along with spiritual elements, and intellectual and artistic training.

The nine virtues taught in Hwa Rang Do are humanity, justice, courtesy, wisdom, trust, goodness, virtue, loyalty, and courage. The students also get to learn fighting with nunchucks, swords, and staffs. In Hwa Rang Do, hard and soft techniques are combined in a way that the fighter can overcome any obstacle thrown in his or her path.

Kuk Sool Won is a relatively new Korean martial art and was created in the 1960s by Hyuk Suh. It can also be called the Korean MMA, as it borrows the best elements from all Korean martial arts. It involves throws, hand and foot striking, and locks. It also involves weapons techniques, healing techniques, and meditation.

Those looking for overall conditioning and an all round style should really look into Kuk Sool Won. It is Korea’s second largest martial art, and is becoming increasingly popular at a global level. The students willing to learn this art have to pledge to adhere to the rules of martial arts, strive for world peace, to be better at teamwork, and to be loyal to their country.

Tae Kwon Do (taekwondo) is one of the most popular types of martial arts in the world. It is the most well known among Korean martial arts, and is included in the Olympics and other major sports events. Its origins go all the way back to ancient times, but the modern version is an amalgamation of moves from several styles.

The reason why taekwondo is so popular is that it has a scientific approach and has the ability to absorb new techniques from different styles. Its organic nature can be attributed to the fact that it was not created by one person, but was formed naturally after collaboration of many schools over a long period of time.

Taekkyon is one of the oldest Korean martial arts and is totally based on unarmed combat. This style includes a variety of hand and foot strikes, and joint locks. Some of the techniques taught in this school even involve head butts. Taekkyon concentrates on development of strength and speed, and the fighting style involves a lot of fluidity and movement. Some of the moves can be described as ‘dance-like’.

This art was taught to warriors before they were trained in weapons. There was a time when Joseon Dynasty banned public teaching and practice of Taekkyon, but the art survived and is now considered a cultural heritage of Korea.

This style concentrates on character building, as well as a variety of kicks, hand strikes, and blocks. There are a few varieties of wrist grabs included among the several moves taught by this school. There is a great emphasis on breathing techniques (i.e. when to exhale and when to inhale during a fight), and light contact sparing.

I also recommend you to read Korean Martial Arts Handbook