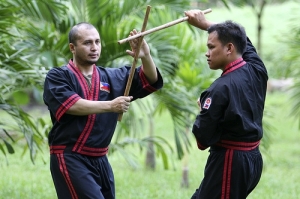 Kali Martial Art  was considerably influenced by the Spaniards, because it was improved by hiding in other styles and as bladed weapons were announced illegal by the Spaniards, Filipinos concentrated on wooden hardwood sticks. It is said that these stick were so hard that they could break a sword blade with one hit. Filipinos started focused on fighting with stick alone, before they got used to and improved their entire system. Over the years the Filipinos started to understand that the stick had different handling, particular ways of attack were open to them that were not uncomfortable with the sword. When they started to be more skillful in the fight with the stick, the use of the knife changed as well and started to be used more sharply with blocking, defending, countering and able to control it.

Some believe that Kali Martial Art name comes from Filipino words Kabot Lihook as it means “movements of the body”. Others say it comes from the name of Kali sword (or Kris). Nowadays it also known as Eskrima or Arnis.

Kali martial art concentrates on the power to move from fighting with weapons to empty hands nice and quickly, because there is always the chance to loose or be without a weapon. Today there are a lot of different styles of Kali, they teach elements of weapons fighting, throwing, grappling, and striking, because Kali Martial Art was influenced by Chinese Kuntao, Indonesian Pencak Silat, Japanese Ju-jitsu and other types of martial arts.

Nowadays Kali fighters are known for their quick movements, effective footwork and for being able to handling and mastering weapons as single stick, double stick, sword, dagger or rattan.