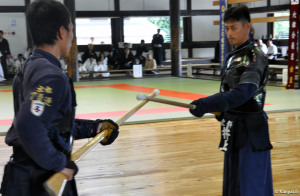 At first Jukendo was practiced in Japanese feudal times, during the Meiji period. The understanding of how to apply a bayonet was essential, especially while faced with an opponent at short-distance or when the fighter had exhausted all his ammunition.

Juken-jutsu was studied in groups by numerous soldiers that realized the profits straightaway. Jukendo School taught to duplicate this practice and to carry on the original studying of it within non-warring surroundings. But to keep a component of reality, a few Jukendo schools included a component of competition between the disciples and learn the art as a sport in the same method as Kendo.

The main difference between Kendo and Jukendo is that Jukendo uses a wooden mock rifle with attached bayonet instead of a mock sword. The hitting areas are principally the throat, the lower body and the heart. Every single hit is expected to kill or to leave the opponent immobilized. The particular attacks were chosen because of their effectiveness. The rifle is kept aside from the body and with the two hands together. The aiming is applied by forcing the rifle and consequently the bayonet in a linear manner. Direct line fighting is frequently applied, because this allows for better level of accuracy and much faster attack. The faster the fighter can hit the object, the better.

To earn points a competitor has to show the precision of the attack and how his object was finally disclosed. The aim is to strike the opponent in a clean and concentered mode so that the point could not be questioned. The most of Jukendo followers are in Japan, but the members are pretty low in number. The sporting side of Jukendo has expanded its popularity. Apparently, this art was more known in the past in times of war when its techniques were crucial.