A guest post from Kicksite. An amazing and very inspiring story of Sue Ward, who used kickboxing as a healthy outlet when she was diagnosed with breast cancer. 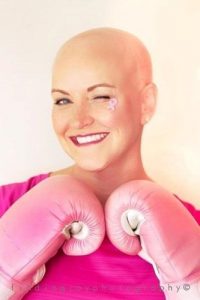 In 2000, Sue Ward received the devastating diagnosis that she had breast cancer. Bad news like that can often be enough for someone to give up, but not Ward. Instead, she made the choice to take a stand against the disease and fight for her health. In an effort to stay in shape and take her mind off the hard road ahead, she turned to the sport of kickboxing.

After being deemed cancer-free, she attended a kickboxing session at a local martial arts school with a friend and immediately fell in love. Not only was kickboxing a great way to exercise, but it also provided her with a positive way to boost both her mental and emotional health. Unfortunately, she was diagnosed for a second time in 2012 with stage 3 breast cancer. At one point during her bout with the disease, Ward actually had to take a break from kickboxing because of the toll all the surgeries and chemotherapy were taking on her. But that didn’t stop her kickboxing family from being a part of her life.

“The amazing part about the whole situation is that everyone I worked out with, and the instructors and the owner, they truly were family, and they embraced my battle with breast cancer and supported me in so many different ways,” she said.

Her own kickboxing family

In fact, they supported her so much so that when she was diagnosed for the second time, her instructors and fellow participants all chipped in to redo her bedroom so she had a peaceful place to come back to after the hospital. Kickboxing has had a huge impact on Ward’s life and given her plenty of motivation to get through the tough times. Not only was she motivated by the appeal of working out, but the desire for normalcy and a routine. Practicing kickboxing influenced her road to recovery and reinforced her fighting spirit and tenacity while she overcame another roadblock.

Sue Ward is an excellent example of how to make the best of a bad situation. Not only is she in great health, but she’s determined to have a positive impact on others. She worked hand in hand with the American Cancer Society for over a decade, and now is working for the American Brain Tumor Association in an effort to lend strength to others going through what she endured. She is certainly a champion of National Breast Cancer Awareness Month, which takes place annually in October.

Ward is cancer-free and excited as ever to be kickboxing in her pink gloves again.

This guest post is based on the following article: Sue Ward Used Martial Arts To Kick Cancer To The Curb.