Should you enter a Martial Arts Competition?

You stand at the edge of the mat. Bouncing from toe to toe, keeping your bloody moving, your pulsed raised. You throw a few shadow punches. You test your weaves. You hear you heart beating.

You crack your knuckles. Sweat slowly drips down your back. You look up and hold your opponents gaze. Your eyes give nothing away. No anger, no nerves, only control. Only the passion for what you’re here to do reveals itself.
You don’t hear you coach. You can’t hear the crowd. You only hear your breath. It’s controlled, forced. You feel ready.

Time suddenly speeds up. It feels like you shouldn’t have blinked more than three times, yet you’ve bowed, exchanged blows, become breathless. Reality hits you for a brief moment where you hear everything around you. Then the focus is back and this time you notice everything and your breathing is steady, controlled.

Fighting in a Martial Arts Competition.

Competition fighting is hugely different from normal class sparring. Sparring is great. It’s fun and can be as light or as heavy as you want (within reason!). You have a chance to practice your fancy kicks or try fighting Southpaw. Sparring simulates a controlled fighting environment so it is very important to one’s martial arts progression. However competition fighting is another kettle of fish entirely!

The martial arts competition doesn’t have to be full contact, or even particularly high level. Yet it still creates a feeling of apprehension and nerves in most fighters. This is good and can be used to advantage, but it is also what makes the step up so terrifying to new competitors. The fear of losing or getting hurt, after putting yourself on the line, is daunting. But it is something I would recommend every fighter does. It adds another dimension to one’s training, just as your first sparring session does. 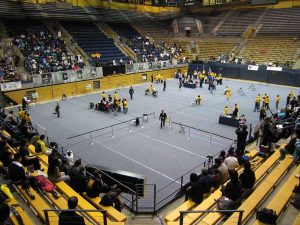 Training for competitions fighting is also much more effective than normal sparring practice. Yes you need to practice things still to improve, but you inherently push yourself harder if you know you have a competition to win coming up. It’s the same old thing as runners who say because they’re signed up to the marathon they’ll get fit enough. They could do it without the marathon. But it makes it easier to do.

The actual fighting in a martial arts competition is normally tougher as well. Everyone enters to win and so they fight to win, to succeed, to achieve. You may start entering some fights and loose horrifically. One of my first national Judo competitions was over in seconds. I made a huge error which, my opponent being much more experienced than myself capitalised on it instantly and won. Foolish, embarrassing, frustrating, but not a waste of time. It is an achievement in itself to enter a competition, to put yourself forward and show you are not afraid of the outcome. Of course true victory is what you’re after, but never be put off a competition for fear of losing. If you’re sure you’ll lose, it’s next to certain you will.

The actual blows exchanged are far more ruthless. Sometimes leaving you black, blue and green in numerous places. You have to learn to adapt your style. Learn to suss out your opponent in seconds and make strong decisions, all whilst taking repeated blows. They’re painful ordeals on occasion. But they can also be some of the most satisfying things you can do. And they will certainly see you improve in your martial art, as a fighter, as a coach, or just in understanding other’s mentality towards a fight.

I hope you embark on a path to a martial arts competition. Even if you only do one and detest it, it’s worth it. You will show to yourself you have the courage to do it. That you are willing to push yourself that far and that you’re able to do it. Maybe you’ll love it and go far. But in your eagerness to compete do ensure you are prepared. Do not enter for the sake of entering. Enter because you’re ready to take the step towards that competitive side of your chosen martial art and want to learn from what that experience offers you. Most importantly always remember to respect your opponent and the competition itself.

Let me know your competition stories. Have you ever lost in 5 seconds like me? Maybe you’ve won in 5 seconds! Comment here or join me on Twitter: @colin1224

A Philosophy graduate with a passion for martial arts, travel and technology. Having done martial arts for over a decade ago I’m still just as obsessed as I was years ago. On Twitter @Colin1224