If you are going to discuss the history of Brazilian jiu jitsu, you have to go back and look at the martial arts that it evolved from, namely judo and before that traditional jiu jitsu from Japan. It was Jigoro Kano who was responsible for the development of judo as a form of physical exercise. Kano had studied two forms of traditional jiu jitsu, Tenshin Shin yo Ryu and Kito Ryo.

These martial arts were the traditional fighting arts of Japans much feared Samurai warriors and many of the techniques in these systems were deemed to dangerous for the public to learn. So Jigoro Kano decided to uphold the ancient martial traditions of Japan, but he wanted to develop a system that was accessible to all his countrymen. So, in 1882 Kano founded his school of Kodokan judo. 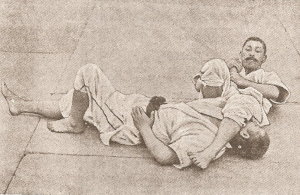 One important part of judo that is still important today is randori, or free sparring. Traditional jiu jitsu was learned and practiced with a lot of set moves, or katas. Judo is trained with a partner and randori gives judokas a chance to try the techniques they have learned against a resisting partner.

Judo proved very popular and effective in Japan and fighters from the Kodokan school were largely unbeatable in the martial arts challenge matches that were held. That was until the Kodokan school was challenged by a fighter called Mataemon Tanabe, who was a master of a jiu jitsu style called Fusen Ryu.

Mitsuyo Maeda had originally trained at a traditional jiu jitsu school, but then enrolled at the Kodokan school to train in judo. He went onto become one of the greatest judo fighters ever and he had a pivotal role in the history of Brazilian jiu jitsu. It was in 1904 that Maeda was sent to the United States to show just how good a martial art Kodokan judo was.

Maeda ended up traveling all over the world fighting in challenge matches, many of them were no holds barred fights where anything was allowed including striking and kicking. Maeda eventually retired unbeaten and lived in Brazil.

In was while he was living in Brazil that Maeda opened his jiu jitsu school. One of his students at this school was a young Brazilian named Carlos Gracie, who studied under Maeda during the early 1920s. It was in 1925 that Carlos, along with his brothers opened their own school and started to develop their art. It was then that the Gracie brothers started to issue the “Gracie challenge” where they would take on any other fighters in no holds barred fights. The brothers’ reputation grew as they beat anyone who accepted the challenge and fighters struggled to come to terms to being taken down to the floor and being submitted.