When reviewing the various types of martial arts we usually think of the many popular Oriental styles. Potentially however martial arts could be found wherever a history of self-defence exists.

Paradoxically history is always changing. With every new discovery in archeology or within existing archives our knowledge of the past broadens and we ask to learn new questions. In this way we can discover how our ancestors used to live – and fight. 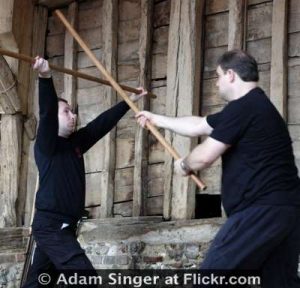 From prehistoric times Britain has always been a set of islands inhabited by people well able to defend themselves. Swords, for example, have been manufactured for 4500 years and have forged much of our history. It is only in the last 200 years that the average person has ceased to carry lethal weapons day-to-day. It is inconceivable therefore that the skills required to use such weapons correctly would not have been passed from generation to generation.

The Growth of English Martial Arts

Recent research, particularly by experienced martial artist Terry Brown, has revealed the codification of English martial arts in the 17th century: martial arts as effective and ancient as those Oriental disciplines to which we have become accustomed.

The development of English martial arts has been fuelled by a natural suspicion of authority by natives of these islands, probably dating as far back as the Bronze Age: before a ruling élite took control.

The ever-present threat of invasion by jealous neighbours and periods of lawlessness ensured a universal right to arms not dissimilar to the present gun law argument in the United States (but with perhaps more justification at the time).

Writing around 540AD, the monk, Gildas, wrote about Britain in this way: “This island, stiff-necked and stubborn-minded, from the time of being first inhabited, ungratefully rebels, sometimes against God, sometimes against her own citizens, and frequently, also against foreign kings and their subjects.” No wonder there has been a history of martial skills in this country!

The bearing of arms, and therefore the need for English martial arts, was boosted in medieval times by the feudal system that required tenants of a lord to be prepared to fight for him as requested. For this reason, some of the weapons found in the English martial arts (as in their Eastern counterparts), such as the bill and quarterstaff, are based on implements available to farm workers. 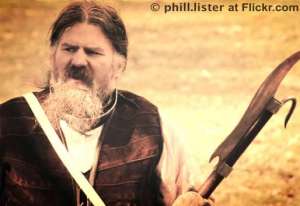 One of the problems with understanding the English martial arts is their roots lie in times when skills and traditions were passed on through word of mouth and little was written.

A few stories regarding the skills of skilled fighters do exist. One story relates to an incident in Nursling, near Southampton, during the English Civil War in 1643 when a farm labourer armed “with a prong and a good heart” was stopped by two zealous Parliamentary soldiers. They became suspicious of a crate placed on the rustic’s cart of hay and proceeded to break it open. The man dragged both from their horses and beat them senseless.

In his compelling book, called simply ‘English Martial Arts’, Terry Brown reproduces intriguing written evidence of the extent of disciplined fighting skills, including the famous story of Richard Peeke, as related in the 1625 pamphlet ‘Three to One’.

During the Anglo-Spanish War fought at the beginning of the 17th century, Peeke, a sailor from Tavistock in Devon joined a raid on the port of Cadiz led by the Earl of Essex. Going ashore amongst a large number of soldiers, Peeke was attacked by a Spaniard horseman. Although he dragged the unfortunate man from his mount, Peeke was overwhelmed by a group of Spanish musketeers.

The hapless sailor was taken to the town of Xerez where he was interrogated in front of a crowd and several noblemen. Responding to jeers from the crowd, Peeke announced that the Spanish were chickens. An angry Duke of Medina offered the Englishman the chance to fight a duel with one of his soldiers.

Peeke replied confidently, “hee was unworthy the Name of an English Man, that should refuse to fight with one Man of any Nation whatsoever.” He was released and fought a Spaniard by the name of Tiago using a rapier and dagger. After a while, Peeke knocked his opponent to the ground and forced a surrender.

The onlookers were not pleased and demanded that the redoubtable sailor face a further challenge. Peeke surprised them by asking if he could fight using a quarterstaff instead. The head was removed from a halberd to create an acceptable weapon and two Spaniards stepped forward to fight. Peeke sarcastically asked if anyone else wanted to join in so the Duke asked how many he wanted. The reply was “Any number under sixe”.

Three men at arms confronted the Englishman with swords and daggers but it still took Peeke little time to kill one soldier and disarm the other two.

Impressed with the fighting prowess of the man, the Spanish released him and sent him home, but only after he had been presented to the Spanish monarch.

Such stories demonstrate the skills of many ordinary Englishmen of the time so it is sad that, until now, the English martial arts have been largely forgotten. One modern day sport is a direct descendant of these skills however: bare fist fighting is included as one of the English martial arts and has metamorphosed into boxing as we know it today.

If you want to find out more about English martial arts, Terry Brown’s website is a great place to start.

Hopefully this fighting style will gain more popularity and the recognition it deserves.