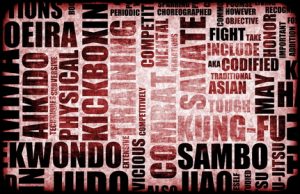 Most popular Types of Martial Arts by areas:

b. Judo: This is another popular Japanese martial art. Judo focuses on joint locks, grappling, and throws. Unlike other types of martial arts i.e. karate, Judo doesn’t include kicks and punches. Judo focuses more on body power as opposed to fitness and stamina.

c. Aikido: This is another popular Japanese martial art type. Aikido focuses on redirecting attacks away from you. Aikido focuses on throws, grabs, pins, strikes and locks. Like Karate, Aikido is popular because of being featured in many action films over the years.

d. Jujutsu: Also known as Jiu-Jitsu, this type of Japanese martial art focuses on holds, joint locks and throws. Jujutsu is aimed at redirecting or manipulating force attacks in order to overpower an attacker.

e. Kendo: This is another popular Japanese martial art. Kendo focuses mainly on sword fighting. Like Karate and Aikido, Kendo is also popular in many Japanese based action films.

a. Kung Fu: Kung Fu is the second most popular martial art type after karate. Kung Fu is focuses on kicks, hand and arm strikes and sometimes weapon training. It is important to note that there are many different Kung Fu styles taught by different Kung Fu schools. It is therefore difficult to transfer from one Kung Fu school to another to learn a certain Kung Fu style. This is one of the main reasons why Kung Fu is not as popular as karate and Taekwondo globally. Kung Fu however commands a large global fan base based on the fact that many action movies have showcased Kung Fu. One of the most unusual Kung Fu forms is Zui Quan popularly known as the drunken fist style. This style imitates a drunkard’s movements i.e. falling over and staggering to confuse opponents allowing time for launching devastating counter attacks.

b. Capoeira: Capoeira is one of the most popular types of martial arts in Brazil. Capoeira focuses on knee strikes, punches, kicks and evading attacks. Capoeira is very acrobatic characterised by a lot of fluid martial arts. Most people easily mistake Capoeira for dancing. The constant movement associated with Capoeira help to avoid and prepare attacks.

a. Taekwondo: This is the most popular Korean martial art in the world. Taekwondo focuses on punches, strikes, kicks and blocks. Taekwondo is popular because it is featured in the Olympics. Taekwondo has spectacular kicks i.e. spinning hook kicks and tornado kicks. This makes Taekwondo very interesting to watch.

d. Hanmudo: This is another popular Korean martial art. Hanmudo is much smoother and open-handed compared to Hapkido. Hanmudo however incorporates use of weapons like Hapkido.

a. Sambo: This is among the most popular types of Martial arts in Russia. Sambo was originally developed in Russia. It resembles mixed martial arts. Sambo involves punches, kicks, wrestling, joint locks and grappling. Sambo is more like Judo and wrestling.

a. Krav Maga: Krav Maga originates from Israel. This type of martial art is focused on dealing with real life combat situations. Krav Maga involves use of kicks, strikes and wrestling among many other techniques. Krav Maga focuses on attacking all the vulnerable body parts of an opponent i.e. groin, eyes e.t.c. Krav Maga is still being used by Israeli Defence Forces to date.

a. Kali/Eskrima: This martial art type is the most popular in Philippines because it Philippines is its origin. Kali martial arts is characterised by the use of blade and stick weapons.