After attaining relative proficiency in the various barehanded combat forms, the majority of martial artists opt to expand their skills to include mastery in the techniques of one or more Chinese martial arts weapons. The question then becomes what weapon one should choose? For more than 5,000 years, Chinese martial artists have developed a vast array of weaponry, created for a multitude of purposes and with varying degrees of lethality.

The four major traditional Chinese martial arts weapons are collectively referred to as “The Courage of All Soldiers” and include the staff, spear, broadsword, and straight sword. With the ever-rising interest and popularity in fighting techniques like Kung Fu, Wushu, and Tai Chi, Chinese martial arts weapons have become not just self-defense tools, but collectors’ items as well. The guide below, intended for every kind of user, explains the background, features, and main purpose for the most popular Chinese martial arts weapons. It will be of great help when deciding on what is the right weapon for your training or collection. If you are in the market for a weapon I recommend to check these online shops and compare prices: Amazon.com, Amazon.co.uk, Dollardays.com, Gadgetsandgear.com

Nowadays, a staff can even be crafted from foam rubber over metal or PVC.Major classifications are the long and short staff. The weight can range from bulky to light, while the rigidity can be either very flexible or very firm. Both these factors are dependent on the materials used to make the staff. Tapering for Chinese staffs can be single, double, or just plain straight. 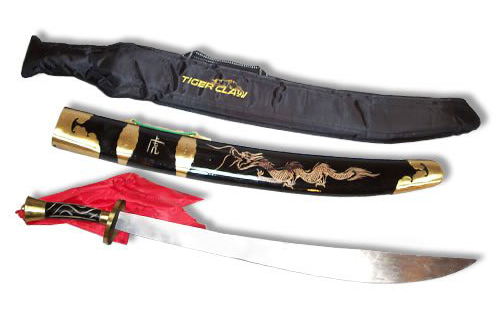 Dao blades generally have a moderate curve and a single edge which makes their thrust especially lethal. A so called “blood groove” is an indentation that was traditionally made on either side of the dao’s. It was meant to reduce the suction for faster withdrawal of a broadsword impaled in an enemy’s body.

To improve handling when making cuts and thrusts, the hilt is curved in a reverse direction to the blade while cord is wrapped around the wooden handle. Modern broadswords used in martial arts displays often have scarves or tassels. Broadsword blades are usually forged from reinforced steel and the handles can either be wooden or metallic. 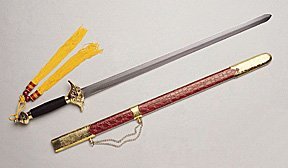 It was traditionally the weapon of choice for China’s scholar class and is one of that country’s most popular ancient weapons still widely used today. The straight sword’s general design comprises of a flattened, straight, and double-edged blade that is diamond shaped. The Jian also has bilateral symmetry along with a triangular rounded guard and pommel.

Straight swords are often adorned with intricately knotted tassels and are currently available in varying lengths. A general rule of thumb when buying one is that the tip of the blade should extend to the user’s eyebrow when the sword is held upright along either arm. 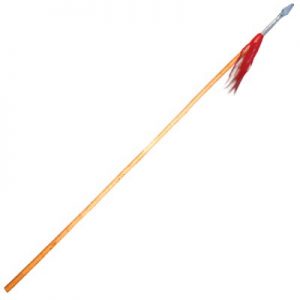 It happens to be one of the weapons that are most synonymous with Chinese martial arts. Spears generally range in lengths of about 2 to 5 meters. However, spears over 3 meters long in most cases intended for training purposes rather than combat. 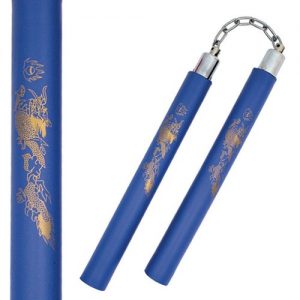 Classical nunchuks were dimensionally tailored in conformance with their user’s anatomical measurements, with the link chain corresponding to the length of the user’s fully-extended hand, for example. Both handles were also custom-made to equal the length from the user’s elbow to their wrist. Every dimension of this famous weapon was optimized to allow versatility in the execution of various combat maneuvers. The handles of this weapon are what makes it lethal. They are usually made from metal, wood, or any other hard composite material.

Dragon Head: Often called a Kwan Dao, the dragon head is a popular Chinese pole weapon widely used in various styles the country’s martial arts. It consists of a relatively that has a notched spike attached at the back to trap an adversary’s weapon.

Additionally, the weapon often includes some irregular serrations running along the blades back edge all the way to the spike. The metallic blade is usually mounted on top of a metallic or wooden pole whose length can range from approximately 1.5 to 1.8 meters. The design incorporates a sharp pointed metallic counter weight to stabilize the bulky blade when striking opponents from the opposite end. The dragon head’s deeply curved blade is particularly suited for making precise sweeping cuts that are reliant on both thrusting range and power.

Hook Sword – also known as twin hooks and typically are used as a pair.

Monk Spade – this weapon is made of long pole with two different ends. One end with the flat blade on, and another one with the crescent shaped blade on.

Meteor Hammer – made of long rope or a chain with one or two heads at the end.

The above list highlights some of the most popular Chinese martial arts weapons and should thus be enough to whet your curiosity and get you to find out more on how you can obtain these and other weapons for your own use.