Is Atemi JuJitsu a Lost Art?

JuJitsu comprises many different facets of fighting such as locks, throws and groundwork. However atemi or striking is an aspect that seems to have been forgotten by many of JuJitsu’s descendant arts. Why is this? Why do these styles no longer make use of atemi and can it be incorporated now? Before we get any further I want to introduce you to a quote:

“In a real battle, atemi is seventy per cent, technique is thirty per cent” 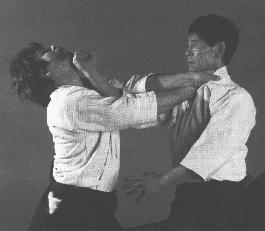 Those words were spoken by Gozo Shioda, founder of Yoshinkan Aikido and student of Morihei Ueshiba, the founder of Aikido. For the practitioner of a style that uses throws and locks to say that seventy per cent of a fight is striking, speaks to the relevance of atemi in self-defence training. Indeed if we were to look at modern self-defence organisations such as Krav Maga, practitioners are taught to make use of aggressive striking initially over grappling techniques.

Does this mean that the practices of styles like aikido and Judo is wrong? No but, it is about understanding the gap between reality and training. In fact both Judo and Aikido removed atemi from regular practice due to the risk of injury and the intent to seriously injure that comes from striking. Jigaro Kano chose to preserve his atemi within kata that would retain the deadlier aspects of JuJitsu but in a safer format. Morihei Ueshiba instead removed atemi for its contradiction of Aikido’s philosophy.

Atemi JuJitsu: Use in the Past

However let us go back to the old ryu’s of Japan. Before the rise of the Tokugawa Shogunate, the need and use of atemi was limited. As young samurai were experiencing constant clan to clan warfare, most combat was armoured. Striking as a result was not used due to the presence of armour. It was only after the clan fighting had subsided that atemi began to be used regularly.

Again atemi’s use was not a primary goal in resolving a fight. As most samurai carried their swords at all times, techniques were centred on allowing them the space to draw the sword. Much like modern police, the samurai were practicing weapon retention. Atemi was more about striking vital areas to cripple and distract. Most throws and locks seem to have been initiated with atemi to open the opponent up.

As time went on, atemi became a much more integral part of training. However once JuJitsu began to decline, the deadly effects of striking were dropped for more humane practice. We have already looked into Judo and Aikido’s discarding of atemi. However both did retain elements of its practice that can be seen today.

Jigoro Kano isolated atemi’s use in various kata such as the Kime no Kata where strikes are used immediately to set up for arm bars, chokes and throws. Meanwhile Aikido’s atemi is used as a distraction though it is practiced as a feint to illicit a response from the attacker. Both have retained this practice of atemi but its form has been radically changed from the practice of the traditional ryu’s

Training to rely on proper technique is essential when understanding grappling concepts as ultimately brute force will only go so far. However use of atemi to initiate a technique can be seen in many of the older JuJitsu ryu’s and shows us atemi’s relevance.

Unlike other styles that train a strike to finish a fight, the atemi of JuJitsu, is used to distract and weaken the attacker. The strike is a means to an end, rather than an end in itself. By using various strikes to vulnerable parts, the attacker’s sensory system is overloaded. This gives the Jitsuka an opening from which to break the opponents balance and follow through with a lock, throw etc.

Atemi JuJitsu: Use in self-defence

Using atemi successfully in self-defence can be seen in many styles. Ultimately a strike will be quicker initially in a fight than trying to lock the attacker up. However if in a situation where you are grabbed, restrained or cornered, combining atemi with assertive use of grappling techniques can be incredibly powerful. If the opponent can see a throw or a lock coming, they will resist. Atemi distracts the opponent and has the potential to cause damage.

It is this use of distraction and weakening that atemi is so useful when practicing a grappling art. I believe this aspect is something that many schools have come back to and incorporated into their practice. In doing this, we may better understand the workings of the old systems and how it can improve our more common grappling elements.