Aikido does have its critics, and is an intensely formulaic Japanese martial art. However, that formulaic nature which actually makes aikido into a very effective, and mentally stimulating, martial art. Although complex to the layman, the basic moves are actually simple and fun to master.

Aikido Training; What’s It All About?

Aikido training is both physical and mental, and is based mainly on two partners practicing formal techniques and forms as opposed to freestyle practice. Most of these come from Daitō-ryū Aiki-jūjutsu, but some were invented by Morihei Ueshiba himself. Essentially, the receiver initiates an attack which is then neutralised when turned against the attacker. Most techniques are a defence against attack, so students must learn to attack as well, and to how react to being neutralised properly (i.e. fall correctly). It is this interplay with attacker and defendant, and the formal techniques, which give aikido great criticism as inflexible and unrealistic.

Many techniques start from grabs. These are safer, and allow martial artists to feel the energy, force and direction of an opponent, so as to neutralise their actions better. Aikido uses body movements to blend with uke (receiving the technique), such as turning, bending, pivoting and standing up.

From around twenty basic techniques, by applying such alterations, thousands of different versions of the same initial defence are available. This is what, in fact, makes aikido so versatile and applicable to real world situations. On top of that, atemi (feints) are also learned to distract and disorientate an opponent, with some being built in to some techniques.

Aikido is not all formulaic grabs, though…

Many moves have their origins in an era of a need to defend against swords and knives. Today, aikido training includes using a ceremonial wooden sword (bokken), a short staff (jo), and knife (tanto). Indeed, some centres teach firearms disarming. Although aikido is traditionally empty handed, Ueshiba and his subsequent pupils incorporated weapons elements into training. Consequently, today weapons training is an integral part of aikdo, together with its emphasis on distance, foot movements, spatial awareness- and one of the golden rules of aikido, working in concert and harmony with your partner.

Straight out of a movie, advanced aikido teaches- and indeed encourages- tackling several random attackers at once, and in an unstructured environment (randori). Not only does this test the students’ knowledge of aikido, but also their ability to adapt to chaotic surroundings, to choose the relevant technique, and to restore order to the chaos around them.

Of course, there is the mental element as well. Aikido emphasises the need for mental and physical relaxation even under stressful situations. This allows the practicioner to boldly and effectively deliver the required series of movements with confidence and clarity of mind. Morihei Ueshiba once commented that “[one] must be willing to receive 99% of an opponent’s attack and stare death in the face” in order to perform techniques without hesitation. Ueshiba was concerned not only with martial arts, but also with internal and external peace and balance for a fulfilling existence; this is no better demonstrated than by the mental aspect of aikido training, with its emphasis on peace and reconciliation. 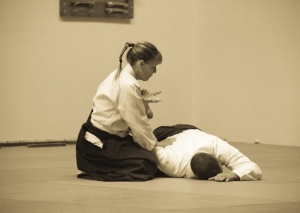 A very important part of aikido is ki, which is neither physical nor mental training, as it encompasses both. Ki is often understood as a single physical and mental focus, but many Japanese martial arts define it as ‘life energy’. Gōzō Shioda‘s Yoshinkan Aikido states that the secret to ki lies in both timing and the application of the whole body’s strength to a single point; by contrast, Ueshiba’s approach to ki was more gentle and softer. Ki can be described as the mental approach to aikido, or the seeking of balance and harmony in the world, by keeping your own mind and body in harmony, condition, and working together.

This is merely an overview of some aspects of aikido training. There is indeed much to encounter, learn and master is this excellent martial art; but the basic building blocks are relatively simple. Your local club will be happy to induct you in the ways of aikido, be you a martial arts expert or complete novice, and to take you from white belt all the way to black belt- along the way you will get fitter, more confident, and actually have fun.